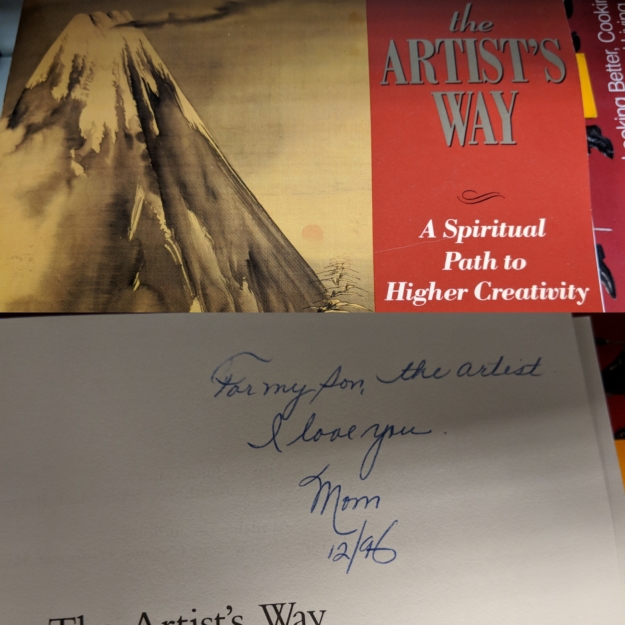 I took this picture of The Artist’s Way

in Goodwill on February 21, 2018. I hope someone eventually took it home and loved and learned from it. Were they encouraged by this mother and her “son, the artist?”

In 1996 Dave was a twenty-year-old sophomore at Webster University, getting his art degree, much to the chagrin of his parents. They’d tried to be supportive, if not openly encouraging, but feared he’d never have an actual paying job.

However, his first public piece—a mixed-media sculpture made of recycled styrofoam from the local burger joint and used condom wrappers, symbolizing the transience of the human experience—had just won an award. The Association for Women Faculty sponsored the event and interpreted the conglameration of boxed wrappers as a subtle condemnation of the commodification of female sexuality. Meaning, after-all, is in the eye of the beholder. Dave was more than willing to go along with the idea. It would impress his date later, maybe not as much as the $50 prize money, but he’d take what he could get.

Dave’s mother didn’t really understand art. Certainly didn’t understand a mess of trash. But if the professional did, it was good enough for her. It eased her mind about his future.

When The Artists’ Way arrived in his campus post box, too big and awkward, and requiring he stand irritatingly in line to retrieve it directly from the distracted girl behind the window, he understood it for what it was, acceptance. The small inscription, “For my son, the artist,” meant more to him than anything the book might contain. (What could it teach him that his professors couldn’t?) He forgot to call and thank her though, too busy trying to catch the eye of that girl

Today, Dave is a 42-year-old High School art teacher. He still dabbles in the occasional free-form, not for a profit art of his youth, but has largely given it up for the stability of a 7 to 5(ish) job, with the chance to pontificate to a captive audience, and the summers off. He’d kept his mother’s peace-offering until last year, when his twelve-year-old twins insisted they couldn’t share a room any longer. His office-slash-studio moved to the garage, to make way for a second bedroom covered in My Little Pony and boy band posters. The books had been sacrificed to the gods of needed-space. But the son, the artist  was ok with that.

View all posts by Sadie